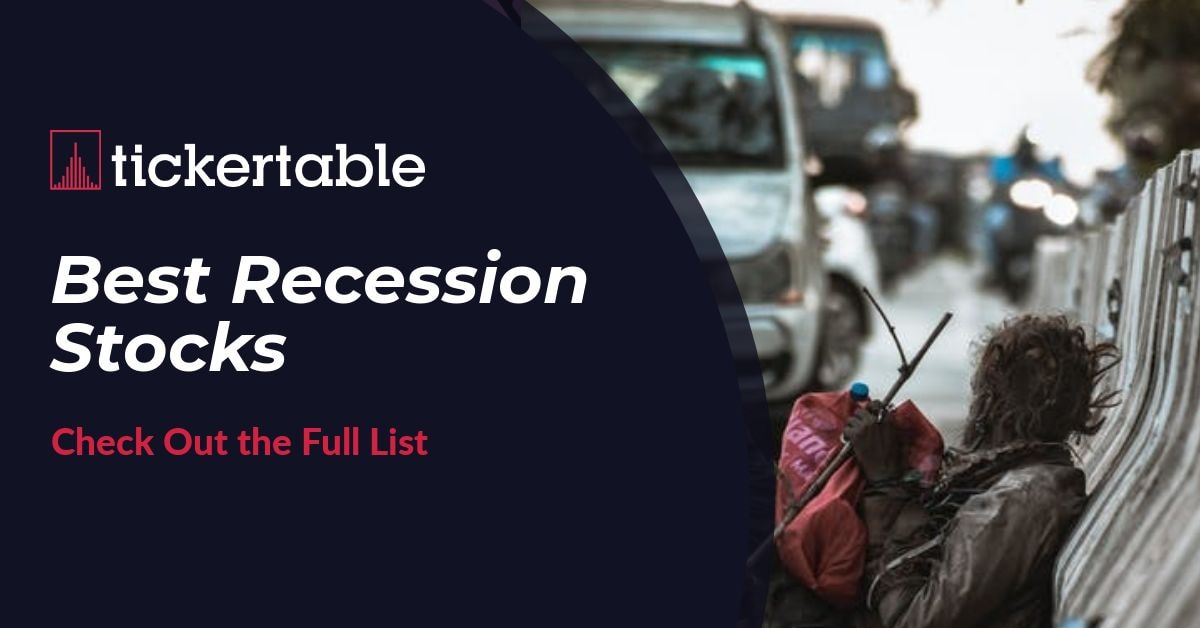 While all stocks are affected by economic downturns, there are some that fare better than others in economic recessions. Such stocks are called recession stocks. Recession stocks mostly belong to stable and well-established companies that continue to provide regular dividends to investors and generate revenue and earnings growth, even in times of financial crisis.

At times, recession stocks also belong to companies that are fairly new but have managed to recession-proof themselves. Recession stocks have stable cash flows and growing income streams. They continue growing, albeit slowly, even when other companies and the whole economy are struggling.

What is a Recession?

The recession is a slowdown in the regular cyclical pattern of economic growth. This typically happens when the economy reaches its peak production and employment levels, after which it slows down.

The average recession typically lasts about 3 months – but it can last longer or shorter depending on the state of the economy.

For example, in 2001 there was an extremely short recession from March to November – lasting only eight months and creating a negative gross domestic product for just one quarter. Whereas, some recessions do not end for years at a time; such as during the Great Depression starting in 1929 which lasted nearly 10 years with no real recovery until 1937. What started as just another stock market crash in 1929 turned into the worst economic disaster our nation has ever seen.

During a recession, people and businesses hold back on spending money – resulting in slowing business activities, rising unemployment, and falling prices. In comparison to the typical expansion period which creates growth through more jobs and purchases. What happens is that when a country experiences rapid inflation it leads to higher interest rates – this causes an investment bubble or some sort of boom periods where people invest heavily with borrowed money for high dividends. Either way there is going to be a bust at one point – causing large amounts of job losses and/or bankruptcies due to overproduction as well as selling investments worth less than what they were purchased for.

It takes time for all these factors to materialize, however, the signs of a recession are evident when the Federal Reserve Bank raises rates – which will end up in higher consumer and business borrowing rates. What happens next is that businesses try to send out less inventory due to lack of demand; resulting in layoffs. Consumer spending becomes more frugal since consumers begin saving more for the time where jobs may be scarce – therefore causing prices to lower. In addition, people do not commonly spend money on luxuries such as eating at restaurants or traveling during this period of low demand for goods and services

During this period it is necessary to know how you can prepare yourself – such as by being prepared with an emergency savings account that would cover your debt payments should you lose your job. What’s more is that these savings can be used as a cushion to pay for things outside of your normal life unless you have significant income coming from other sources.

In order for one not to panic during this recessionary period, it’s important to save your money – especially if you’re without another job. What’s more is that if this recession is especially long, it might pay off to invest your money in something that will generate passive income, such as by purchasing rental property or investing in stocks that have a solid dividend (such as some of the stocks listed above_.

Remember that the entire market does not implode during these times; so there are opportunities during recessions for one to build wealth – but you must be smart about making those investments.

Factors to Consider Before Investing in Recession Stocks

Investors must first consider the sector the recession stocks belong to. The companies in recession-resistant businesses like healthcare, gold, renewable energy, consumer staples, etc. end up generating steady returns for their investors irrespective of the economic conditions. Additionally, recession stocks of companies that sell discounted wares hold up well too.

Investors should also perform a detailed fundamental analysis of recession stocks to understand the dividend yields, business models, and strength of balance sheets.

However, investors must also remain aware that recession stocks also come with their set of risks. Their resistance to recession is not fool-proof. Therefore, the portfolio should remain diversified with a balanced mix of recession stocks and other stocks.

Which Recession Stocks Should I Buy?

A large number of recession stocks trade on the stock exchanges. All these stocks ensure that they maintain their dividend payment and overall growth in the times of recession. Overall, recession stocks help investors conserve their capital and stay afloat in rocky times.